What is the Mass, According to Experts 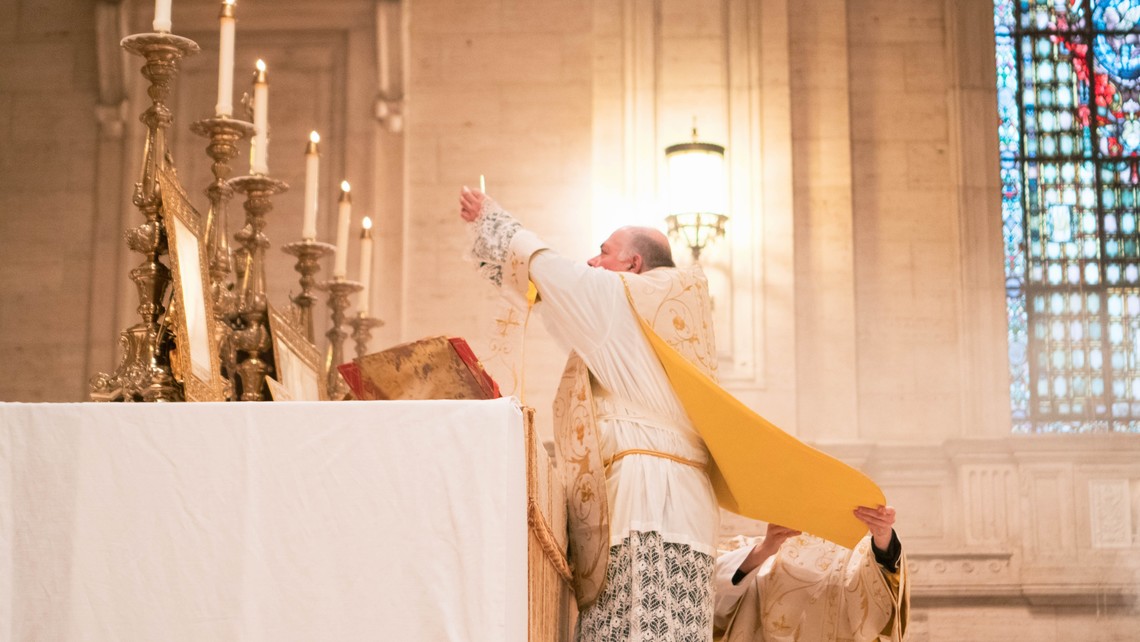 For over 2000 years people have asked, What is the Holy Mass? If you are looking for a thorough but concise explanation, you have come to the right place.

What is the Holy Mass,
According to Experts

What follows is a somewhat brief and semi-formal presentation about the Mass in general. 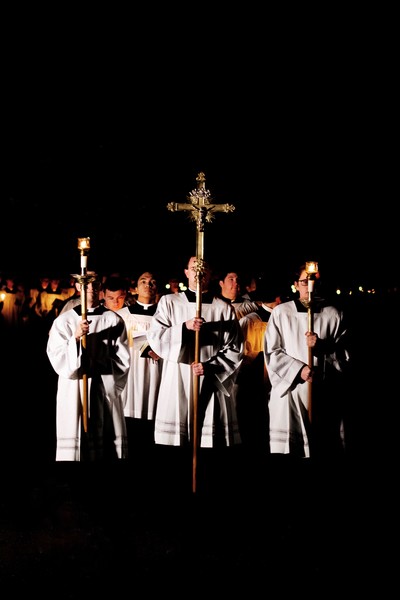 The Catechism of the Catholic Church (CCC) discusses in Article 3 what the Church has always taught about the sacrament of the Holy Eucharist and Holy Mass.

At the Last Supper, on the night he was betrayed, our Savior instituted the Eucharistic sacrifice of his Body and Blood. This he did in order to perpetuate the sacrifice of the cross throughout the ages until he should come again, and so to entrust to his beloved Spouse, the Church, a memorial of his death and resurrection: a sacrament of love, a sign of unity, a bond of charity, a Paschal banquet ‘in which Christ is consumed, the mind is filled with grace, and a pledge of future glory is given to us.’ (CCC 1323)

This explanation of the mystery of the Holy Eucharist comes from Chapter 2 of Sacrosanctum Concilium, also called the Constitution on Sacred Liturgy, which is part of the documents of Vatican II. It is important to recognize where Sacrosanctum Concilium has received this teaching from. It mostly comes from the teachings of St. Augustine and his Tractatus in Ioannis Evangelium. St. Augustine is regarded by many as perhaps the greatest philosophical and theological thinker in the history of Western Civilization matched only by St. Thomas Aquinas. This teaching of St. Augustine is more easily grasped in the words of Venerable Fulton J. Sheen,

In order, therefore, that God might seal His love for us, He gave us to Himself in Holy Communion, so that as He and His human nature taken from the womb of the Blessed Mother were one in the unity of His Person, so He and we taken from the womb of humanity might be one in the unity of the Mystical Body of Christ. Hence, we use the word “receive” when speaking of communion with our Lord in the Eucharist, for literally we do “receive” Divine Life, just as really and truly as a babe receives the life of its mother.” (Sheen 49)

The teachings declaring that the sacrament of the Holy Eucharist being the pinnacle of the Christian life are based upon the foundational doctrine of the institution of the Eucharist. The account of the institution of the Eucharist comes from the Gospels and St. Paul. Specifically, the Gospel of John, Chapter 6, in the Bread of Life Discourse, describes what Jesus would reveal later during the Last Supper.  The complexity, gravity, and mystery of what Christ did by instituting the Holy Eucharist fulfills countless prophesies and revelations.  For example, the Jewish Passover meal demands a spotless lamb to be sacrificed to God in place of the slaughter of the first-born sons.  When lambs were slaughtered in ancient Jewish custom, they were tied to a cross and cut, so the blood of the lamb would drain.  Jesus is referred to as the “Lamb of God”.  Another example is that the institution of the Eucharist fulfills the Old Testament Covenant by opening access to the whole human race, not just the Jews, into the family of God for all eternity. This, at the same time points to the greatest act of love ever demonstrated.  God literally, voluntarily gave His life in the crucifixion, conquering evil and death through this incredible selfless and humble act of love.  This confirmed that love is more powerful than evil and death.  This is all completed and culminates in the institution of the Eucharist.

Additionally, as the Catechism points out,

Jesus chose the time of Passover to fulfill what he had announced at Capernaum: giving his disciples His body and his Blood:

Then came the day of Unleavened bread, on which the Passover lamb had to be sacrificed. So Jesus sent Peter and John, saying, “Go and prepare the Passover meal for us, that we may eat it…” They went…and prepared the Passover. And when the hour came, he sat at table, and the apostles with him. And he said to them, “I have earnestly desired to eat this Passover with you before I suffer; for I tell you I shall not eat it again until it is fulfilled in the kingdom of God.”…And he took bread, and when he had given thanks he broke it and gave it to them, saying, “This is my body which is given for you. Do this in remembrance of me.” And likewise the cup after supper, saying, “This cup which is poured out for you is the New Covenant in my blood.” (CCC 1339)

This is taken directly from the Gospels and describes how Jesus directed the disciples to eat his body and drink his blood. St. Paul in 1 Corinthians 11:23-26 further explains the importance of the Last Supper and the Tradition of the Institution of the Eucharist.

For I received from the Lord what I also handed on to you, that the Lord Jesus, on the night he was handed over, took bread, and, after he had given thanks, broke it and said, “This is my body that is for you. Do this in remembrance of me.” In the same way also the cup, after supper, saying, “This cup is the new covenant in my blood. Do this, as often as you drink it, in remembrance of me.” For as often as you eat this bread and drink the cup, you proclaim the death of the Lord until he comes.

Interestingly, when this dialogue occurred, many of the Jews, “returned to their former way of life and no longer accompanied him.” (John 6:66) It has been said that Jesus could have quickly recanted and clearly told them that he was speaking symbolically. But he did not do that.  He let them walk away and asked his closest followers, if they were going to leave also.  This sad display shows how much Jesus respects our freedom and how much he desires us to come to him accepting everything he offers, even difficult teachings.

It has now been demonstrated that the whole of Catholic life and Catholic identity is wrapped up in the understanding that the Holy Eucharist is God. Nothing should be more important than being in communion with God and therefore the utmost care must be taken when receiving God in this Holy Sacrament.

When one receives Holy Communion, it signifies unity with God, and by extension, unity with the Mystical Body of Christ, the One, Holy, Catholic, and Apostolic Church. The Catechism of the Catholic Church says, “Communion with the Body and Blood of Christ increases the communicant’s union with the Lord, forgives his venial sins, and preserves him from grave sins. Since receiving this sacrament strengthens the bonds of charity between the communicant and Christ, it also reinforces the unity of the Church as the Mystical Body of Christ.” (CCC 1416)   Pope Benedict XVI said,

The Body and Blood of Christ are given to us so that we ourselves will be transformed in our turn. We are to become the Body of Christ, his own Flesh and Blood.

We all eat the one bread, and this means that we ourselves become one. In this way, adoration, as we said earlier, becomes union. God no longer simply stands before us as the One who is totally Other. He is within us, and we are in him. His dynamic enters into us and then seeks to spread outwards to others until it fills the world, so that his love can truly become the dominant measure of the world. (United States Conference of Catholic Bishops 227)

To conclude, the most important take away is it understand that Holy Mass is the re-presentation of Christ’s sacrifice on Calvary.  As usual Bishop Fulton Sheen clearly states that,

The most sublime act in the history of Christ was His Death…He Himself told us that He came “to give His Life as a redemption for many”…If then Death was the supreme moment for which Christ lived, it was therefore the one thing He wished to have remembered.  He did not ask that men should write down His Words into Scripture…but He did ask that men remember His Death. And in order that its memory might not be any haphazard narrative on the part of men, He Himself instructed the precise way it should be recalled…Hence the Mass is to us the crowning act of Christian worship. (Sheen, 10-12)

The Holy Mass and Christ’s gift to us is so layered with meaning and complexity that it’s hard to grasp all that is wrapped up in it.  It brings together Old and New covenants, extends to Gentiles and Jews, unifies the Church, opens the gates of Heaven, fully displays God’s mercy and willingness to forgive repentant sinners, allows us to be with God here on earth, and so much more.  But it is all about His crucifixion and the most selfless act of love and greatest gift ever given.  The gift that God, Himself, gives to us by offering Himself to us through His death on the cross really can’t be comprehended.  But we can understand that the Holy Mass brings us all to Calvary and therefore the utmost reverence and care should be taken while we are witnessing this re-presentation of the offering and the immense love our Father has for us.

We hope this helps you better understand why the Mass should be offered reverently and gives you a basic grasp of why its so important!

If you are looking for a simple guide to going to Mass, either in the ordinary or extraordinary, check this post our here.

Catechism of the Catholic Church 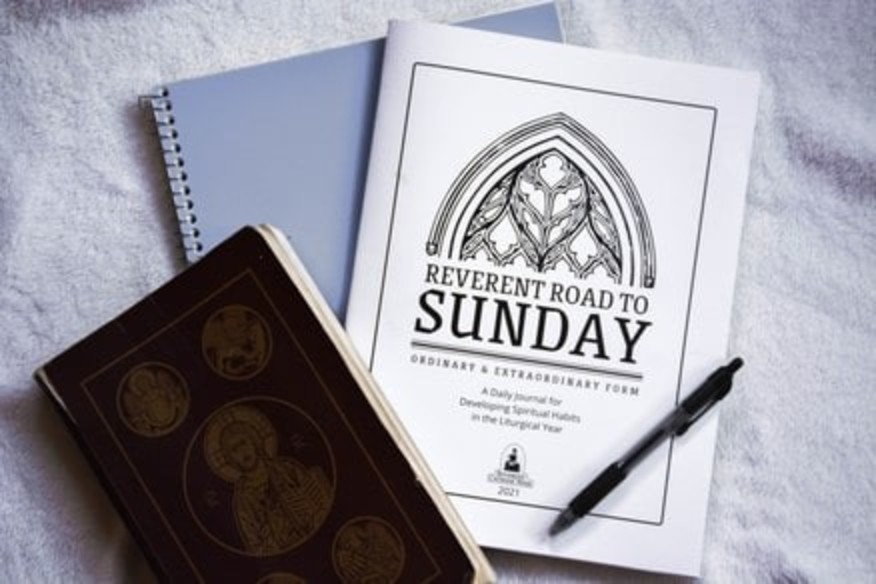