What Everyone Should Know About How To Receive Holy Communion 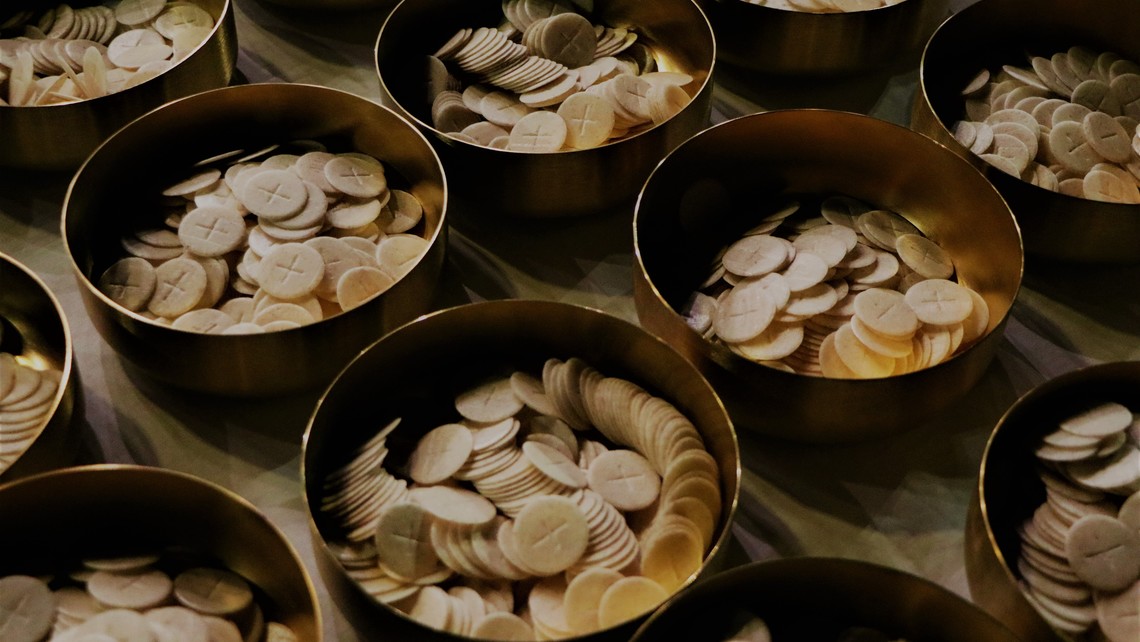 What Everyone Should Know About How To Receive Holy Communion

Should you receive in the hand on or the tongue? This article will help you understand the most reverent way to receive our Lord in the Holy Eucharist.

It was Christmas time in Washington D.C. and I was attending Christmas Eve Mass at a beautiful church decked out with Christmas trees, lights, wreaths, and a nativity.

After I received Holy Communion I knelt back down at my seat to pray a prayer of thanksgiving when I noticed out of the corner of my eye something horrifying.

A gentleman was walking past me with the Holy Eucharist in his hand, sniffing it, and appeared to be confused as to what to do with it!

I didn’t even think.

I jumped up, stood in front of him, pointed at my mouth and told him to consume the host!

He looked shocked and confused. I told him again.

Thankfully he complied. I told him thank you and we both took our seats.

I had to do something without causing a big scene and it seemed like the best thing to do at the time.

Situations like that cause many in the Church to say that Holy Communion should only be received on the tongue (which is how it used to be).  It is not only more reverent but also prevents situations where someone walks off with our Eucharistic Lord either accidently or nefariously.

The Church allows receptions in the hand and the tongue and therefore it is important for us to get some background on it.

Recently, I happened to see great bulletin article written by Fr. John De Celles discussing how one ought to receive Holy Communion, some background on reception on the Hand or Tongue, and altar rails.

It is posted with his permission below:

The History of How to Receive Holy Communion

What is the “proper” or “best” way to receive Holy Communion—in the hand or on the tongue? The Church currently leaves this decision to our individual consciences, but allow me to make a few brief observations in this regard.

For the first few centuries of the Church, receiving Communion in the hand was a common practice. But as time passed it became the practice to receive Communion directly on the tongue in order to assure that the Host was received reverently. This was the law of the Church for almost 14 centuries, and is still the general norm today.

However, in 1969 Pope Paul VI allowed an exception: individual bishops can give permission to their people to receive Communion in the hand if it does not lead to any loss of reverence. While most bishops permit Communion in the hand, some, seeing a loss of reverence, are withdrawing that permission and requiring their people to receive only on the tongue. And if you ever watch a Papal Mass you see that folks who receive Communion from Pope Francis must receive on the tongue.

The Reasons Behind How to Receive Holy Communion

There are many reasons for not receiving on the hand. For example, consider the risk of having particles of the Host—each of which are also truly the Body of Christ—remain on your hand after you receive. Also, it is a fact of human nature that the more you handle an object, no matter how precious it is, the more likely it is that you will take it for granted and forget its value—and this is often the case with the Body of Christ. In this same line, the Host is no ordinary food, and receiving on the tongue—rather than handling it as we do most food—is a dramatic reminder of this.

Because of these and many other reasons, I recommend that all of my parishioners prayerfully consider receiving Communion on the tongue.

However, it is your choice, and there’s nothing illicit or wrong about receiving in the hand—there are many very good reasons for doing so. I am in no way reprimanding those who exercise this option, and I respect your choice.

How To Receive Holy Communion in the Hand

That is: Receive by placing your left hand on top of your right hand as if you were creating a throne to receive your God, keeping your eyes on Christ; and then, stepping to the side, carefully take the Host in your right hand and place It in your mouth, being careful to consume any crumbs remaining on your hands. Please remember, the Host must be “consumed at once, so that no one goes away with the Eucharistic species in his hand.”

Also, you should not receive in the hand if you are holding something or someone (i.e., a baby) in your hands or arms, which would naturally tend to diminish the attention and care you give to the Host in your hand.

Please prayerfully consider my words, and I will respect your discernment.

Background on the Receiving Holy Communion at the Altar Rail

For centuries, the Church required all those receiving Holy Communion (except for the priest-celebrant at Mass) to kneel when receiving. This requirement was set aside with the changes in the Mass in 1970, although Vatican II had been silent on the matter. So the practice is neither suppressed nor discouraged. The Bishops of the United States have established standing as the norm, “unless an individual member of the faithful wishes to receive Communion while kneeling.”

The fundamental reason I re-introduced the use of the altar rail (or “communion rail”) here at St. Raymond’s was to accommodate the popular demand/desire that many people have to exercise their right to kneel to receive Holy Communion. Now, it’s true that you don’t need a kneeler to kneel to receive Communion. But without a kneeler it is much more difficult, clumsy, time- consuming and conspicuous than it should be, and therefore discourages most people who would like to kneel. This is really unfair.

But when there’s a kneeler/rail it is much easier for people to kneel down and get up again. Moreover, with up to 8 people at-a-time standing/kneeling at the long rail, there is no need to rush to get out of the next person’s way. Finally, with everyone at the rail, if two people kneel and two people stand, no one stands out. So by adding the Communion Rail, everyone can receive comfortably the way they want, kneeling or standing.

Why to Receive Holy Communion While Kneeling

But let me be clear, and not disingenuous: there are great spiritual reasons for kneeling to receive Our Lord. Kneeling is well-established as an important expression of adoration of the Eucharist—and so the Church requires us to kneel during the Eucharistic Prayer and for the “Behold the Lamb of God...” As St. Augustine, taught: “No one eats that flesh without first adoring it; we should sin were we not to adore it.”

Cardinal Robert Sarah (Prefect Emeritus of the Congregation for Divine Worship) reminds us of how Pope St. John Paul II gave us an amazing example of this, as he writes: “I simply ask you to recall that at the end of his life of service, a man in a body wracked with sickness, John Paul II could never sit in the presence of the Blessed Sacrament. He forced his broken body to kneel. He needed the help of others to bend his knees, and again to stand. What more profound testimony could he give to the reverence due to the Blessed Sacrament than this, right up until his very last days.”

Taking his great predecessor’s example to heart, in 2008 Pope Benedict XVI required the faithful who received Communion from him to do so kneeling at a kneeler, and Pope Francis has continued this practice.

For more information, this article from Crisis Magazine is very good as well. Pastoral Guide to Receiving Communion