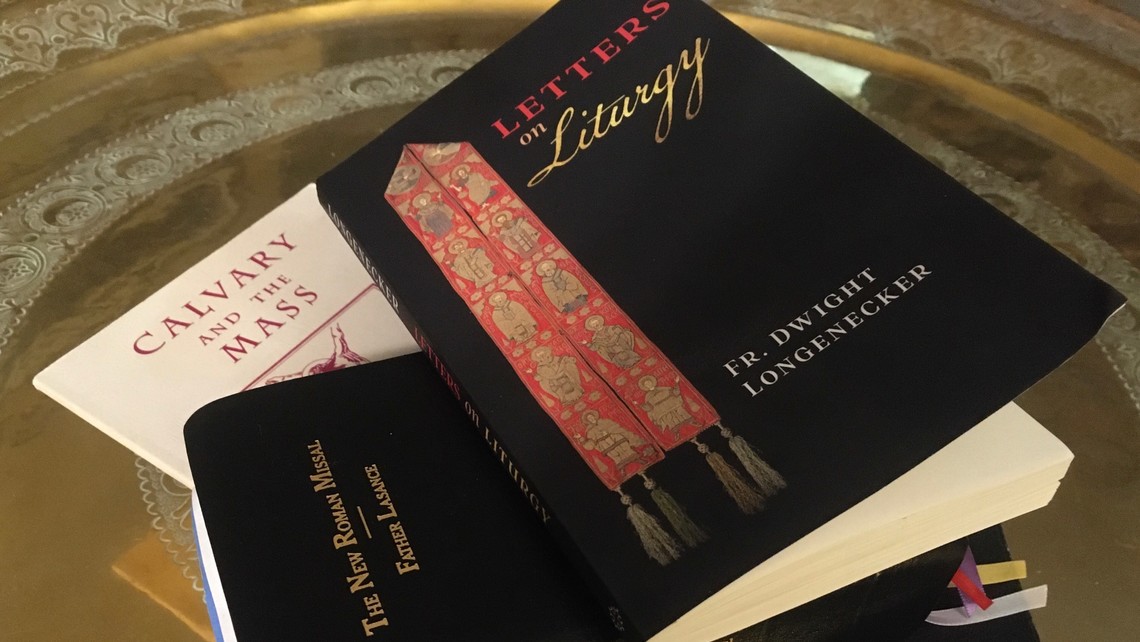 As an Amazon Associate I earn from qualifying purchases. If you purchase through these links, I make a percentage at no additional cost to you.

Is it possible to find a way to re-unify the liturgy of the Roman Rite, quell the tribalism that sprung forth since Vatican II, and inspire reverence to be observed during all Masses?

I believe it is possible.

It is part of the reason we created ReverentCatholicMass.com.

It seems providential that right when we launched our website, Fr. Dwight Longnecker had just published the book, Letters on Liturgy.

Fr. Dwight Longnecker's book was written with the full knowledge that he was wading into a contentious debate that is being played out in Catholic parishes all across the world.  He takes the position of a pacifist who is attempting to illuminate a middle ground between the Extraordinary and Ordinary Forms of the Mass.  He acknowledges that the Extraordinary Form is truly the “Mass of the Ages”, but also recognizes that the Novus Ordo, if offered reverently, according to the rubrics, and oriented towards Christ in the tradition of Extraordinary Form, it “can combine the best of our traditions, while still being accessible to most Catholics”.

I have had many of the conversations with the several young priests I know, and they and I agree, that it would have been advantageous to just allow the Extraordinary Form Mass to be offered in the vernacular, rather than changing so much and allowing so many options for the priests.

Fr. Dwight Longnecker discusses how the liturgy after Vatican II became more focused on the Lord’s Supper, which is why it only made sense to turn the “Source and Summit of the Christian Life” into a fellowship meal with folk music, liturgical dancing (yikes), reception of communion in the hands, and a downplaying of the role of the priest.

Letters on Liturgy offers many practical ideas on how to bring about a positive change and re-orient the Mass back to its foundation, which is the glorification and worship of God.

I support many of the ideas recommended, including that all seminarians should learn the Extraordinary Form and study Latin, the language of the Church.  Additionally, Fr. Longnecker advocates that seminarians also study sacred music, art, and architecture.

Letters on Liturgy discusses how the “Spirit of Vatican II” undermined the role of the priest and why the priest in the proper context of in persona Christi capitis is vital to proper worship. He discusses how a “shallow kind of egalitarian ideology” found its way into the liturgy, making some priests feel embarrassed to come across as “superior”. As a way of leveling the playing field, certain priests feel obligated to give everyone a part in the Mass.  Fr. Longnecker also takes on the issue of altar girls, the confusion it causes, and how a priest can attempt to pastorally handle that dilemma.

An excellent observation discusses how one can assess the different forms of liturgy.

We should not judge according to the music we happen to like or dislike, nor should we judge solely on external things like vestments, candles, architecture, or art.  We are not judging the worthiness of the worship according to our particular tastes, culture, or ethnicity.  We judge according to the liturgy’s focus on the passion and resurrection of the Lord-which lies at the heart of the Eucharistic sacrifice.  The externals either help achieve that focus or hinder it.

This makes sense because Fr. Dwight Longnecker prescribes the medicine of beauty to further bring the unexplainable mystery that is the Ordinary Form into the hermeneutic of continuity.  The beauty that is demonstrated in the Extraordinary Form is the beauty and glorification of God that moved the saints and martyrs to give themselves to Christ.

My favorite quote which highlights this is,

I highly recommend this book because it discusses the symptoms causing the disunity afflicting the Catholic Church and encourages the remedy that is needed for Catholic liturgy.  It articulates very clearly the same positions we hold at Reverent Catholic Mass.  It highlights what is good, true, and beautiful and encourages others to do the same.  It is written in a lighthearted and casual style which makes it accessible to everyone. The insights provided should give needed perspective to the many positions held in the liturgy debate.