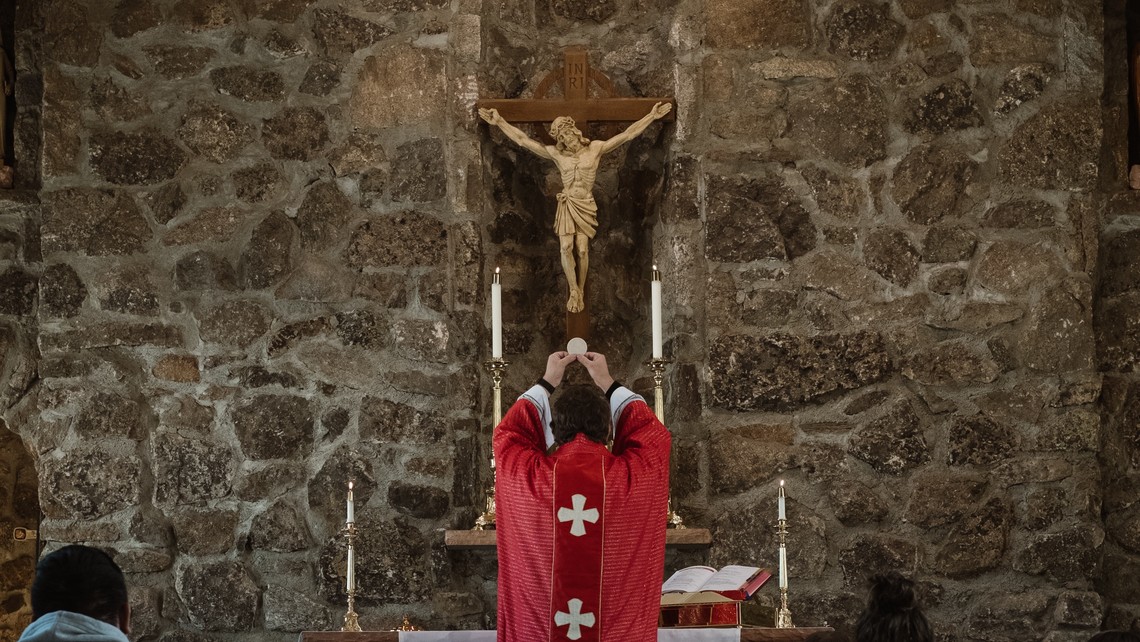 The Bible, Vatican II, and the General Instruction of the Roman Missal Support Ad Orientem Worship.  There is no reason Ad Orientem should be a divisive topic.

Have you ever been so moved by the Mass that you were compelled to utter the words, “My Lord, and My God”?

This doesn’t happen often to me but, I have.  It was at an Ad Orientem, Novus Ordo Mass at Christmas.

Most of the issues stem from the confusing implementation of the Vatican II Document Sacrosanctum Concilium and its encouragement of active participation from the laity during Mass.

This is how Catholics have always worshipped the Lord and according to Sacrosanctum Concilium and the General Instruction of the Roman Missal, should continue to worship God.

Now even the first covenant had regulations of divine worship and the earthly sanctuary. For there was a tabernacle prepared, the outer one, in which were the lampstand and the table and the sacred bread; this is called the holy place. Behind the second veil there was a tabernacle which is called the Holy of Holies, having a golden altar of incense and the ark of the covenant covered on all sides with gold…

Now when these things have been so prepared, the priests are continually entering the outer tabernacle performing the divine worship, but into the second, only the high priest enters once a year, not without taking blood, which he offers for himself and for the sins of the people committed in ignorance….

But when Christ appeared as a high priest of the good things to come, He entered through the greater and more perfect tabernacle, not made with hands, that is to say, not of this creation; and not through the blood of goats and calves, but through His own blood, He entered the holy place once for all, having obtained eternal redemption. For if the blood of goats and bulls and the ashes of a heifer sprinkling those who have been defiled sanctify for the cleansing of the flesh, how much more will the blood of Christ, who through the eternal Spirit offered Himself without blemish to God, cleanse your conscience from dead works to serve the living God?

The Catholic priest, Ad Orientem, (Facing East toward Jerusalem) in persona Christi (the High Priest Jesus Christ) during Mass, in the re-presentation of the sacrifice of the crucifixion, leads us of out of our earthly bondage of sin and death to the Heavenly Jerusalem.

“For every high priest taken from among men is appointed on behalf of men in things pertaining to God, in order to offer both gifts and sacrifices for sins;… and because of it he is obligated to offer sacrifices for sins, as for the people, so also for himself. 4 And no one takes the honor to himself, but receives it when he is called by God, even as Aaron was.

When the priest faces us, or at least faces away from the Lord, it disorients the Mass and inverts it.  The priest, in his posture, no longer leads the laity toward God.  It orients the sacrifice and offering toward the creature instead of the Creator.

To be in union and to have a common posture means that everyone, including the priest is in union facing the Lord in the same direction.

Finally, with so many Catholics who do not even believe in the Real Presence, it’s more important than ever that the Mass reflect the reality of what is transpiring in front of us.  This means reverently offering the Mass in the light of tradition.  The phrase “Lex Orandi, Lex Credendi” has been making a comeback recently and the truth it speaks aligns perfectly with the reason Ad Orientem is so important. “As we pray, so we believe”.

We will also email you with resources to help you in your spiritual, liturgical, and parish life.

Our Lady told us to Pray the Rosary Everyday. You just need schedule it.
September 5, 2020
Committing to pray the rosary everyday when you are already is busy is hard enough. These 4 tips will help you stay the course... END_OF_DOCUMENT_TOKEN_TO_BE_REPLACED

If You Want More Reverence at Mass, Then is Starts With You!
August 15, 2020
If you want more reverence in church and the Mass, then it begins with you. Check out these tips and thoughts to do your... END_OF_DOCUMENT_TOKEN_TO_BE_REPLACED

2 Groups to Check Out to Find Holy Friendships
August 8, 2020
Do you wish you could make more Catholic Friends and find that it's surprisingly difficult? Here are a few ideas that might help.... END_OF_DOCUMENT_TOKEN_TO_BE_REPLACED